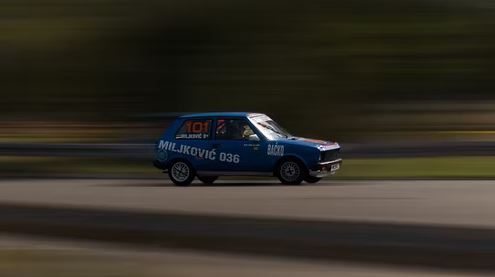 The car was originally known as the Zastava 102 and rose to popularity (or should we say infamous) as the Yugo. The Yugo, also known as the Zastava Koral, was a product of Zastava Automobiles, Yugoslavia’s largest vehicle manufacturer. Even though the Yugo’s name suggests it was named after the country of origin, Vuic maintains it was called after the southern wind jugo. Some evidence to back this up: the brand’s original spelling was Jugo, but it was later altered to Yugo to make it more appealing to the international market.

The Yugo was manufactured in Serbia, but it was created in Italy by Fiat and Zastava engineers in 1977 at Fiat’s design center in Turin. The Yugo was inspired by the legendary Fiat 127, which won European Car of the Year in 1972. On Friday, November 28th, 1980, mass production of the Yugo began. The date was picked so that the first car could be completed on November 29, the former Republic Day.

The 1986 Yugo GV is a front-engine, front-wheel drive, 4-passenger, 2-door hatchback vehicle type. Its engine type has an iron block and aluminum head, SOHC 8-valve inline-4, and a 1×2-bbl Carter-Weber 740.

The car failed crash tests, sales plunged, and it was soon mocked by everyone: Saturday Night Live, Jay Leno, David Letterman, and The Simpsons. Kids made jokes about it, and one Philadelphia dealer advertised a “Toyugo” special, but most purchasers turned down the free Yugo that came with their Toyota.

The story of the Yugo

The Yugo: The Rise and Fall of the Worst Car in History, by Jason Vuic, is a comedy of errors about how one particular car became the most disliked vehicle in the United States. The Yugo was created by a dizzying array of capitalist hucksters and destitute communists desperate for cash, and what could have been a tremendous Cold War international relations win was wrecked the moment consumers and auto critics got to drive it. With a fine journalistic eye and razor-sharp humor, Vuic investigates the multiple failures of the Yugo endeavor and the people involved, making this a terrific read for anybody interested in automotive history or 1980s nostalgia.

Every narrative needs a captivating core protagonist, and in Vuic’s book, that figure is Malcolm Bricklin, a businessman who made his fortune importing little vehicles into the United States. Vuic portrays him as a deft manipulator and larger-than-life figure, a guy entrenched in the excesses of the 1980s whose grandiose marketing ideas are only matched by his penchant for extravagant spending. From his early days as a co-founder of Subaru of America in a scheme to import the Subaru 360 minicar to his attempt to persuade the government of New Brunswick to finance his Bricklin SV-1 “safety” sports car, his entire career up to the Yugo endeavor is meticulously detailed.

The rise of Yugo

In the last 100 years or so, there have been a lot of cars that have had the bad luck to be called “the world’s worst car.” Some of these titles have been much more hilariously wrong than others. Malcolm Bricklin was stuck in a bind in May 1984. His business of bringing in Pininfarina Spiders and Bertone X1/9s was failing, and he had 120 days to find a better car to sell here or go bankrupt. So Bricklin combed the globe, first flying to England to try to land Jaguar, then to Serbia, a republic of communist Yugoslavia at the time. There, in the parking lot of the Hotel InterContinental in Belgrade, he and Tony Ciminera, a former Fiat executive, first looked at the Yugo, a hatchback based on a Fiat.

Even though it was a communist-made car sold in Reagan’s America, people lined up 10 wide to get one. Yugo America sold a whopping 1050 cars in a single day. However, what goes up must come down. There were significant issues with the quality. The car was slow, reaching 60 mph in 14 seconds and topping out at 86 mph. There were also the reviews to consider. Csaba Csere, C/then D’s technical director, wrote, “It’s obvious to me that the Yugo GV is inferior to every other automobile launched in America.”

The fall of Yugo

As a result, the Yugo, according to Vuic, was somewhat a victim of its popularity. It would have been quickly pushed under the carpet if it had not been so blown up. Instead, after the first consumers who lined up to buy the car realized how bad it was, the same journalists that had built the excitement leaped on board to mock it.

Several owners testified that the Yugo was well deserved for its reputation. Most only made it to about 20,000 miles, at which time they would frequently burn through two or three clutches. The radio lasted about a month, and the gear shifter was prone to falling off. As for the dash lights, rainwater would leak through cracks in the body panels and around the window seals as they burned out almost instantaneously. Even with meticulous care and maintenance, the 0.9-liter engine’s power was so insufficient that carrying four passengers was nearly difficult, and the ignition switch was prone to popping off of the steering column.

Worse yet, the car’s engine was designed in such a way that it was prone to self-destruction. Failure of the timing belt on a four-stroke interference engine would interrupt the synchronization between the pistons and valves, forcing them to clash and perhaps damage the engine.

Is Yugo the worst car ever made?

Despite the Yugo’s infamous reputation for poor quality, the fact that it was initially sold in the United States meant that it had to meet some presale requirements. For example, it would have had to pass safety tests, crash tests, and any emission tests before being marketed. Though Yugo has its fair share of negative results and was one of the worst cars ever made in history.

Even though hundreds of the models are still on the road in Eastern Europe, the lowly little Yugo’s only lasting contribution has been limited to a handful of funny punchlines. Today, it is better to be safe than sorry. That is why an aspiring car or vehicle owner should have a guide in buying a car.